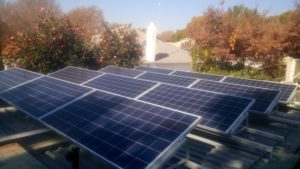 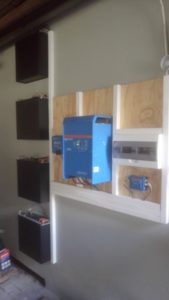 The PV Panels were mounted on a double garage structure that needed major support structural work, and the roof itself was reconditioned before the structure was applied. 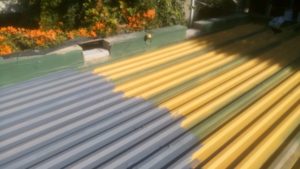 2x 200mm I Beams were specified by a structural engineer to span the roof for support. 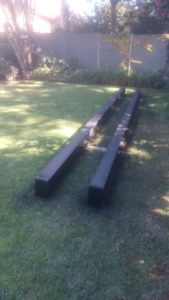 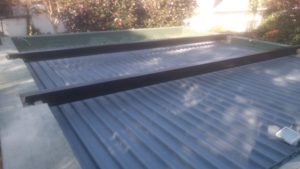 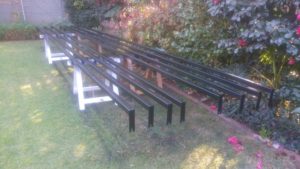 Square tube beams then supported the PV Panel brackets.
All beams were coated with a rust preventative and final coat. 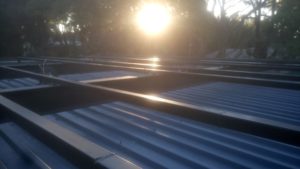 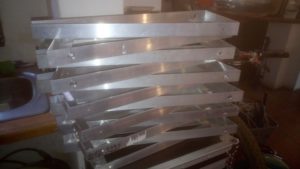 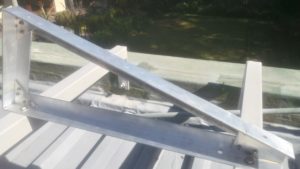 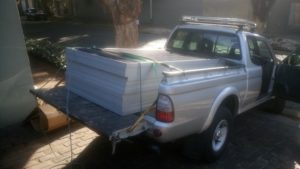 The panels are here! 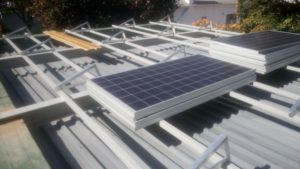 It all came together nicely. 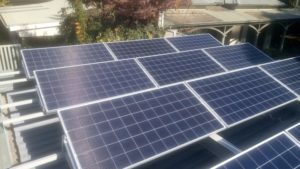 All mechanical, electrical  and electronic engineering performed by ourselves.

Group of 750l tanks were installed for rain water harvesting for garden watering and swimming pool use. All gutter down pipes were diverted to feed Leaf Catchers and First Flush Diverters and associated plumbing such as overflow pipes using 75mm PVC piping and fittings. Reinforced Tank Bases were built on concrete foundations, brick work, lintels and concrete plaftorm. The project was completed in December 2016. 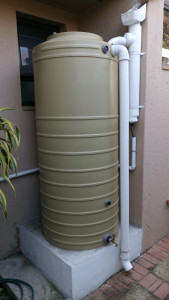 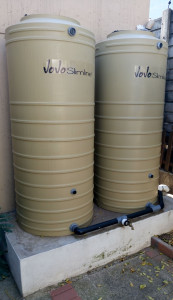 Set of  coupled 750l tanks with built base 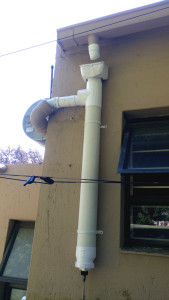 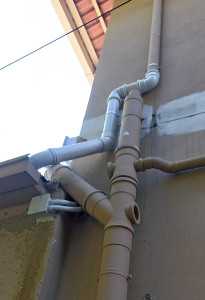 Rerouting of down pipes with 75mm PVC Pipe & Fittings 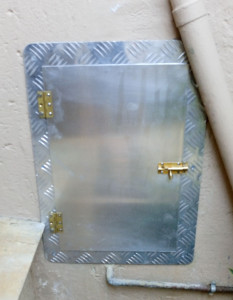 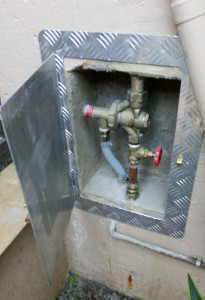 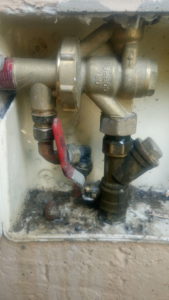 The international NGO Greenpeace was involved in a Solar Energy Project in rural India, which fell apart and into disuse when overloaded with domestic appliances. Villages then demanded  “We want real electricity, not fake electricity!”

1st World good intentions meets 3rd world realities? How many funded projects like this lay waste essentially because the solution was not thought through in all aspects? or was perhaps even inappropriate? The technology is just part of the solution to societal problems.

The Inverter Board and battery banks were installed in the garage at a height which cleared the front of the car when parked. The Gave motorised bypass switch can be seen above the local sub distribution board  to the rhs. A separate battery-backed up 12V power supply is necessary to power this, which can be see adjacent to the Gave.

Additional space was provided on the board to accommodate future additions such as a Solar Charger.  Provision was also made for another string of batteries.

Cabling routing from the main distribution board in the house (with a flat) roof presented some challenges. Here two runs of 25mm PVC ducting carry the conductors to and from the Inverter Board.

To route the cables through the roof, a number of portholes had to be cut in the ceiling since there was no access to the roof, besides there was  no working clearance in the roof.   The openings were then fixed, sealed and finished and restored.

The circuits to be powered by the Inverter were separated and arranged at the vacant bottom row of the Main Distribution. The Remote Controller was mounted there as well, which was custom made to fit into the board. The Remote has two push buttons to change the state of the Bypass Switch, as well as an On-Off Switch for the Inverter. This allows the system to be activated when necessary. 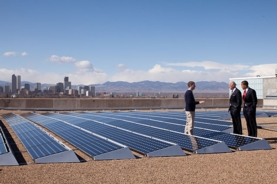 ‘Georgetown, Texas, is home to the oldest university in the Lone Star State and is affectionately called the “red poppy capital” of Texas. It will soon add another accolade to the mix: the state’s first city-owned utility to run on 100 percent renewable energy.

Last Wednesday, the city announced a 25-year contract with SunEdison to buy 150 megawatts of solar energy. In order to supply the power, SunEdison will build a solar farm in West Texas. The solar will complement a deal Georgetown signed last year with EFD Renewables for 144 MW of wind power from its West Texas wind farm through 2039.

Between the two sources, the city of about 50,000 people will have more than enough power even with projected population growth, said Keith Hutchinson, a spokesman for the city.

When it came down to it, Hutchinson said the price was right for renewable power.

“With renewables, you avoid the price volatility of fossil fuels,” he said. “We’ve certainly seen plenty of volatility in the price of natural gas and gasoline. This removes that uncertainty and locks in a long-term low cost.”

Georgetown is the latest city to join the renewables quest, which has been slowly growing across the country.

Technological innovations have dropped the price of wind and solar in some markets to be not only competitive with traditional fossil fuel power generation, but sometimes less expensive, said Malcolm Woolf, senior vice president of policy and government affairs for Advanced Energy Economy. In many other places, renewables are gaining ground quickly. Coupled with increased transmission infrastructure, favourable policies, subsidies, and renewable energy goals in states and cities, it’s becoming more common to see wind, solar, hydropower and biomass use.

As states consider cutting emissions 30 percent by 2030 under EPA’s Clean Power Plan, renewable energy is increasingly becoming part of the conversation, as well.’

March 26, 2015  by Brittany Patterson and ClimateWire

“Rooftop solar panels on have always been the province of well-to-do, eco-friendly folks willing to shell out extra bucks to be green, but that is all starting to change. According to the National Renewable Energy Laboratory (NREL), the cost of putting solar panels on a typical American house has fallen by some 70 percent over the last decade and a half. And a recent report from Deutsche Bank shows that solar has already achieved so-called “price parity” with fossil fuel-based grid power in 10 U.S. states. Deutsche Bank goes on to say that solar electricity is on track to be as cheap or cheaper than average electricity-bill prices in all but three states by 2016—assuming,that is, that the federal government maintains the 30 percent solar investment tax credit it currently offers homeowners on installation and equipment costs.”

Experts suggest that without nuclear power the world has little chance of restraining global warming to less than 2 degrees Celsius.

Since the 2011 Fukushima Daiichi nuclear accident in Japan chilled global attitudes toward nuclear power, the world has been slowly reconciling its discomfort with nuclear and the idea that it may have a role to play in reducing greenhouse gas emissions to tackle climate change.

With fossil fuels growing as sources of electricity across the globe, the IEA sees nuclear power as a stable source of low-carbon power helping to take polluting coal-fired plants offline.

To accomplish the needed CO2 emissions cuts to keep warming no greater than 2°C, the IEA says global nuclear power generation capacity needs to increase to 930 gigawatts from 396 gigawatts by 2050. With nearly 100 nuclear reactors, the U.S. has more nuclear power plants than any other country, representing 105 gigawatts of production. France, Japan, Russia and China round out the top five countries using nuclear power.

“This marked the greatest number of reactors being built in 25 years,” IEA Executive Director Maria van der Hoeven said in a statement. “Nuclear energy also remains the second-largest source of low-carbon electricity worldwide. And, indeed, if we are to meet our collective climate goals, nuclear energy is critical.”

All forms of low-carbon energy must be employed to reduce global greenhouse gas emissions, she said.

That conclusion is consistent with the Intergovernmental Panel on Climate Change’s findings last year that global carbon dioxide emissions need to be capped at 450 parts per million in order to prevent warming greater than 2°C, Robert N. Stavins, director of the Project on Climate Agreements at Harvard University and a drafting author of the IPCC’s Working Group III Report, said.

By Bobby Magill and Climate Central – 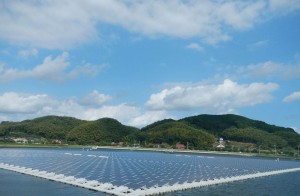 The biggest floating plant, in terms of output, will soon be placed atop the reservoir of Japan’s Yamakura Dam in Chiba prefecture, just east of Tokyo. When completed in March 2016, it will cover 180,000 square meters, hold 50,000 photovoltaic solar panels, and power nearly 5,000 households. It will also offset nearly 8,000 tons of carbon dioxide emissions annually. (Since the EPA estimates a typical car releases 4.7 tons of CO2 annually, that’s about 1,700 cars’ worth of emissions.)

Two more concentrating 100MW solar power plants will be built in the Northern Cape, according to the Department of Energy